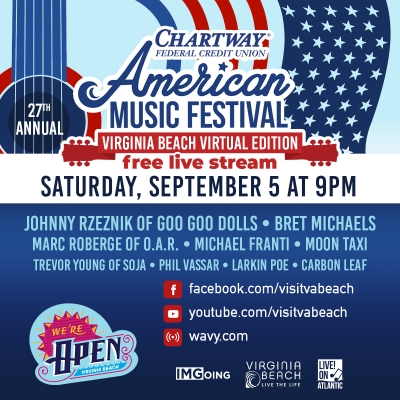 The free online AMF virtual concert will be broadcast 9:00 p.m. All artists have performed at AMF before.

“This year’s festival might be a bit different, but we want to make every community in which we live and serve better, which is why it’s a privilege for all of us at Chartway to help bring this fun experience for our third consecutive year as Title Sponsor.”

Bret Michaels headlined the 2011 AMF’s 5th Street Main Stage, performing to one of the Festival’s largest crowds ever. He’s sold almost 50 million records as a solo artist and as Poison’s lead singer.

Marc Roberge performed a headlining set with O.A.R. on the 5th Street Main Stage in 2012. The band has played nearly every major area venue through the past decade and enjoys a large Hampton Roads fan base.

Michael Franti was in the 2016 AMF that moved to the Virginia Beach Convention Center because of inclement weather. He attracts a widely diverse audience with his unique musical blend of hip-hop, rock, jazz, reggae and funk.

Moon Taxi opened for 311 on AMF’s Main Stage in 2019, and many people believe the indie-alt rock quartet stole the show from the headliners.

Trevor Young is guitarist and vocalist of SOJA. The Arlington band opened for Ziggy Marley on the 2018 5th Street Main Stage. SOJA has earned two Grammy Award nominations and released four consecutive No. 1 albums on the national reggae music charts.

Phil Vassar opened for Sheryl Crow on AMF’s Main Stage in 2015. The Lynchburg pianist and singer has 19 Billboard Country Chart hits and was American Society of Composers, Authors, and Publishers’ (ASCAP) 1999 Country Songwriter of the Year.

Larkin Poe performed at AMF in 2019 in what’s become one of the most raved-about sets in the event’s history. The duo features strong southern harmonies, heavy electric guitar riffs, and slide guitar. The ladies often are touted as “the little sisters of the Allman Brothers.”

Carbon Leaf is a Richmond band that last played AMF in 2018, bringing their total appearances at the Festival to six years. Their indie-rock and alt-country sound has earned the group a significant core of fans in the region.

Back to top
X
X